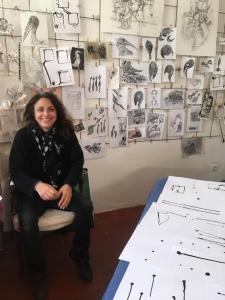 A very discreet artist, focused on her art above anything else, Helena Faneca draws and paints mental geographies as well as fantasies arisen from her nightmares. Influenced by Francesco de Goya and Eugène Leroy, she works patiently on the evocative power of the artistic shapes, putting many layers of meaning together. Intimate and open simultaneously, her works combine the rough iconography of the industrial landscape and the bright light of the sky of Portugal, Provence and Northern New Mexico as she can imagine it.
Helena Faneca was born in 1958 in Barreiro, in the industrial suburbs of Lisbon (Portugal). She immigrated with her parents in France 6 years later in Valenciennes, a small industrial city in the North of France. Exile will have an indelible impact in her artistic work, especially in mental landscapes.
Faneca studied visual arts at the University of Lille and attended a few years more the School of Fine Arts in Tourcoing.At the age of 30, Helena Faneca decides to devote herself professionally to art after a two-year stay in Brazil, shaken by Brazilian spirituality and its myths. She then began a series of oil paintings, trying to define “this strange fixity of classical painting” that André Masson invokes. In 2000, in the search for finding a critical interpretation in the face of random coincidences, which occurred in his pictorial work, the artist enrolled in a master’s degree in Visual Arts at the University of Lille, and worked on the etchings of Eugène Leroy. Faneca then moved South, 1st to Toulouse, then to Pézenas, a town famous because Molière lived there, where she lives and works now.
Faneca had many solo and group shows in France and Brazil. Her works are part of many collections.